This past weekend was a short, successful kayak fishing trip. I had decided late Friday evening after my previous plans had fallen through, that I was going to try my luck at fishing the mouth of the Little Qualicum river. I’ve heard nothing but great news over the past few weeks of how great the coho and spring fishing was going around that area so I thought I’d better give it a shot and am I ever glad I did!

My friend Matt had decided to join me (again, last minute) and we made plans to be on the water for 9:00am as slack tide was 10:00am. We didn’t even know where we were going but found a beautiful launch site half a kilometer from the mouth. When we got there, the tide was out so we had to drag our yaks over what seemed to be 18 city blocks of beach. We had finally reached the water and it was now 10:15am and the end of slack tide. There were a ton of boats, float tubes and fly fishermen peppered everywhere. We hadn’t even been there an hour and I could her a couple boaters talking about another spot (not kayak do-able in a days paddling) where double headers were abundant. It wasn’t long after, nearly every power boat had reeled in and left this ‘so called’ hot spot we were currently paddling in. I had started asking the handful of remaining diehards how their luck was and not one person had a good thing to say. I put a 4oz. banana weight, no flasher and a 5 inch green, white and black Coyote spoon on. Matt and I then decided that we would troll north past the mouth then back too our launch site. Lets just say, what happened next was NOT what I was expecting.

Literally after about 100 paddle strokes of our decision, my rod went nuts. I thought it was another rock fish but when my line started to travel horizontally, I knew I had something worth getting excited about. I yelled back to Matt that I had something on, he reeled up and paddled close to see the commotion. It was about a 10 min. fight until i saw silver shine coming from the end of my line. I grabbed my net that I thought was large enough to bring a fish this size but i was wrong, man, was I wrong. 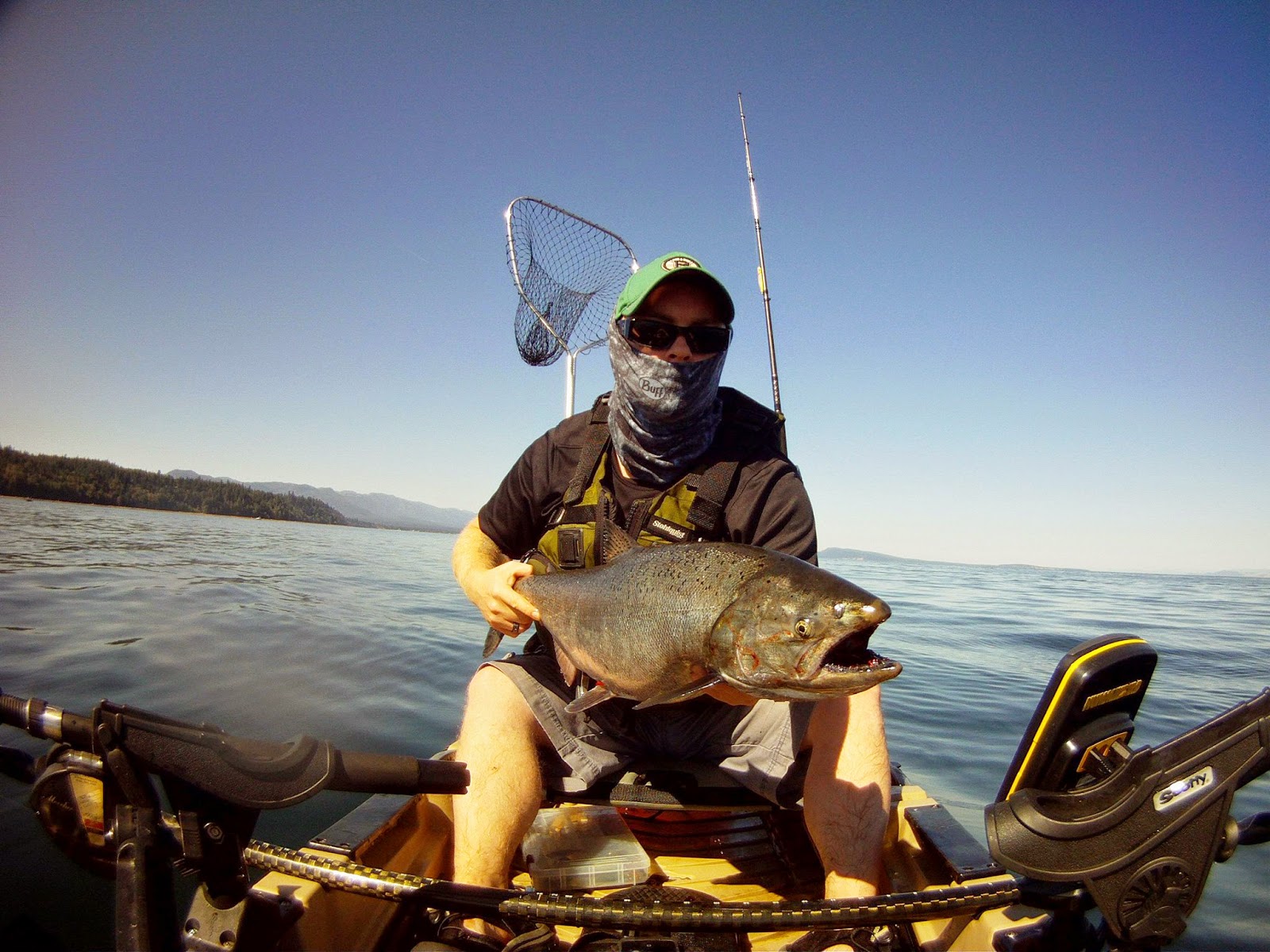 I took about 5 attempts trying to manipulate him into the net but it just wasn’t working. Meanwhile, I’m yelling and using words for adult ears only thinking he was going to spit the hook at any moment. Angrily I took one more shot and then the worst happened. He dove underneath my kayak opposite to the side I was playing him and well, dragged me in with him. (No lies). The combination of my weight being on the one side, the fish going to the other and the fact that I simply got caught in the moment lead to this. My kayak stayed expensive side up but I was now in the water, holding onto the side of the boat with one hand the rod with the other. Matt paddled over to me and took the rod so I could climb back in. I’m now in my kayak but my paddle is about 30 ft away (I'll be sure to use my Scotty Paddle Leash next time) and my friend is playing my fish so I’m not asking him to help. I used my net to propel myself over to my paddle and start over again. Once I reached Matt, he handed me the rod back and grabbed his net to seal the deal. If he didn’t smell so bad I could have kissed him (you too Matt.) The fish ended up being a 15lb. chinook salmon. I was soaked through to my birthday suit, angry, happy and ecstatic all at the same time. It’s now 12:30 pm and it’s time to go home… 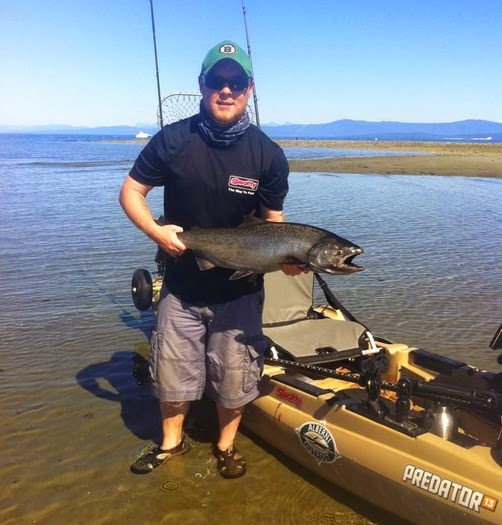 The best last minute decision I’ve ever made.

www.twitter.com/AnthonyYakFish
www.instagram.com/anthonyreid12
Since moving to Vancouver Island at the of age 5, I picked up my first fishing rod and the sport quickly became my favorite hobby, my passion and one might even go as far as calling it a priority. At the age of 10, my family was fortunate enough to move to, and care-take, a remote lodge in the Broughton Island group where I bought my first boat with the money I had earned from cleaning the visitors’ catches. This is where I really became familiar with fishing techniques for a wide variety of salt water species.
Upon moving back to ‘reality’ a few years later I took to fresh water fishing as I no longer had unlimited access to the ocean. Since then, I have fished every corner of the island for a wide variety of species whether it be salt or fresh, boat or on foot. I first tried kayak fishing a few years back in a SOT [sit on top] kayak I borrowed from a friend and it’s safe to say I was completely sold on the concept.
It was shortly after that I had bought my own kayak, I sold my aluminum boat and have never looked back. I love the fact that I can launch my kayak literally anywhere, either fresh or salt with little to no effort. Deep pockets are not required and it’s great exercise. The saying “the fish was so big it pulled my boat around” is no longer a tall tale.
Posted by Scotty Fishing Products at 14:55 No comments:

Share your favorite fishing photos with countless other avid anglers and Scotty fans on Instagram and Twitter! Use our official hashtag "#TheWayToFish" to be featured in our feed that has over 10K posts and is growing daily!

Scotty Fishing Products
Sidney, BC
The Scotty trademark has become recognized to mean product excellence. The total commitment to quality, fair pricing and unmatched service means our customers everywhere can expect reliability and satisfaction from every product that carries the Scotty name.